Officially launching the group; Liverpool for Europe held an event this week in the city. At this pivotal moment as we enter the General Election, and the UK begins negotiations with the European Union the strength of feeling within Liverpool has been growing. A feeling and solidarity that can be replicated up and down the country. Walking towards the CoWorkz on Brunswick Street near the waterfront you got the first sense of this with the EU blue flag, inclusive of the group emblem as the window display showing how deep this feeling goes. 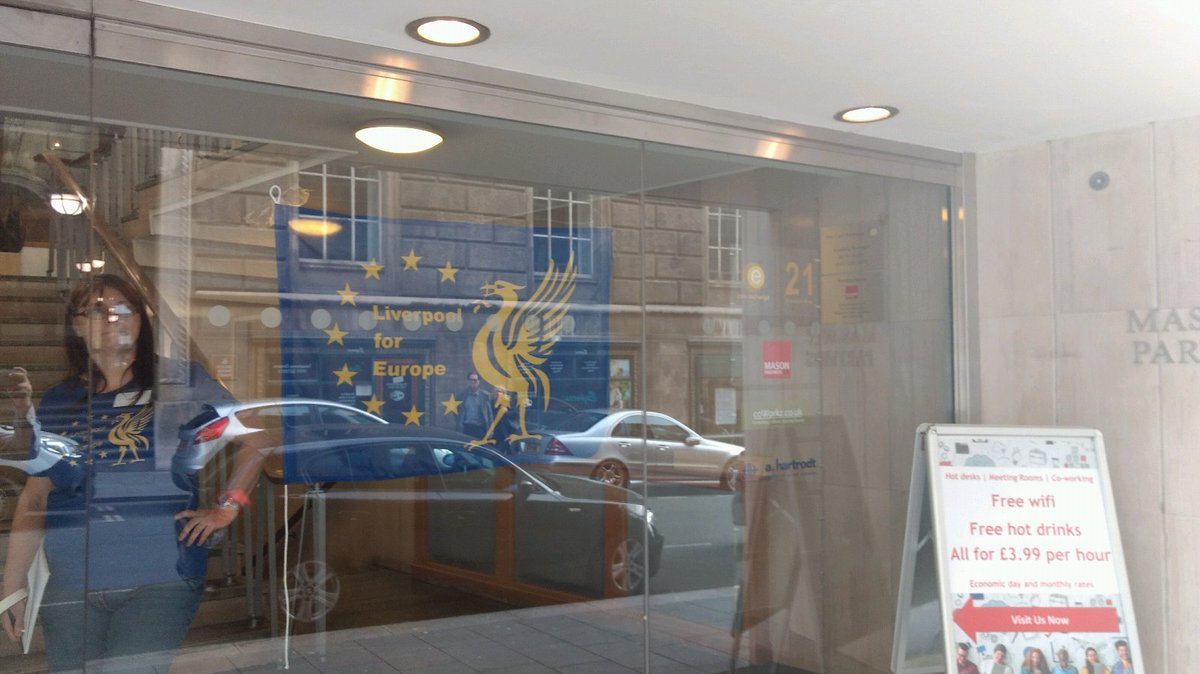 After a short time for food and networking the chair of the group welcomes everyone with how the group has grown since June. Brenda Bixter then added: “If someone had told me two years ago, I would be chairing a political meeting, I would not have believed it”.  Laughter was then heard throughout the audience with the words: “We are not behind Theresa May… although with the image of standing next to a cliff edge, it is tempting”. Liverpool itself voted massively for remain last June, and is seen as a vibrant, friendly and welcoming place to be proud of to it’s residents and new arrivals. “We have several (non UK) nationals who have been here for decades and are now unsure of their future”.

The goal of the group is to bring the community together and discuss building momentum, both in the short and long term. Campaign Officer Steve Gavin, then spoke about the aims moving forward: “we believe that Liverpool is a great European City & Liverpool for Europe wants it to stay that way.” Steve added:  “to achieve this aim we are committed to carrying out activities that keep the remain campaign in the public eye.”

Professor Michael Dougan, from the University of Liverpool was the invited speaker for the evening. The Professor of EU Law has gained a great following since before the vote in June through his online videos which have received views into the millions, and has been invited to speak all over the country. Michael began speaking on his four predictions made before June 23rd , which were cast out as “project fear” by some, but now proving “project reality”. The first was the risk to protective regulations on social & environmental matters by leaving. The Great Repeal Bill has been mentioned by May’s government. The second was the risk to UK unity. Nicola Sturgeon (First Minister of Scotland) has recently put across again her pledge for a second Scottish referendum on independence. There is also the issue of the Northern Irish border with the Republic of Ireland that would still be in the EU. The third considers the time it would take to leave as negotiations can’t start until the divorce is settled, not 18 months that the government hopes for. The fourth and last considers our trade deals with the rest of the world once leaving has been completed. Michael also doesn’t mince his words calling May’s government “viciously antidemocratic” and Brexiteers are still “fighting the campaign over and over”, and not preparing the country for what lies ahead.

Short speeches from local political candidates were then given, starting with Graham Hughes, an independent. Graham is an adventurer who traveled back from South America to stand against Labour Stephen Twigg, and knows how tough trade would be across the world rather than on our doorstep within the EU. Councillor Richard Kemp of Liverpool City Council spoke about how Europe is at the centre of the Lib Dem manifesto for the upcoming general election. Richard added: “We demand a second referendum. People decided to go on the path to leave. As negotiations make clear what leave entails, they need to vote”, with the party united on this. The Mayoral candidate Tom Crone of the Green Party then spoke: “EU made rational policies to protect the environment.” A Bonfire of regulations” is seen as a real threat”. Existing MP and election candidate for Wirral South; Alison McGovern of the Labour Party defended membership of the single market and importance of getting out to talk to voters.

There was a chance to ask questions of the candidates, and further networking after the panel had finished their speeches. Liverpool for Europe was grateful to all those attending, showing how the movement is growing. The words could be said to be inspiring and motivating from the range of speakers. Professor Dougan himself gave optimism with the words: “never be ashamed of being British” as we are the owners of the true values of this country, not the leave campaigners and officials. Even with the all the depressing news shown by the media on a daily basis, there are reasons to keep positive!